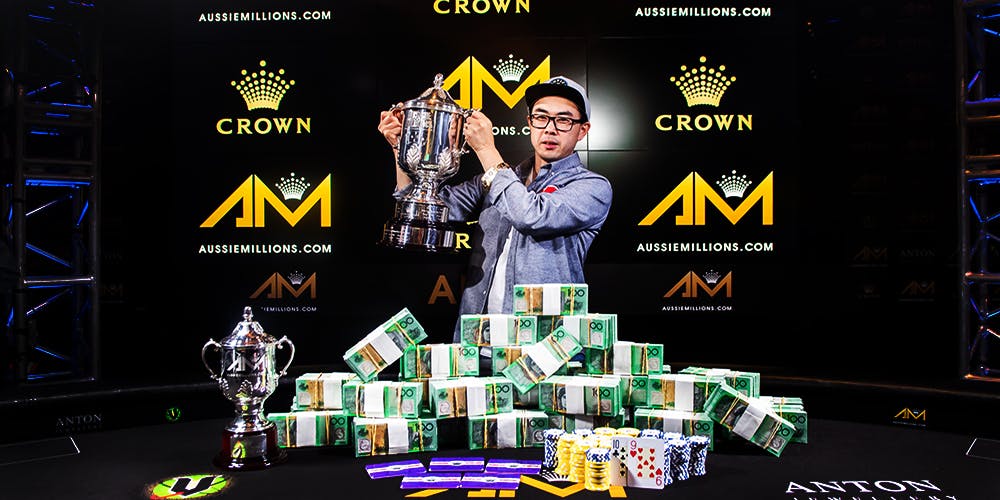 There are several important poker tournaments in Australia. The biggest name in the industry is Aussie Millions, as it also offers the most generous prize pool money. The event is an annual poker competition, usually held at Crown Melbourne. The event gathers the most prominent players not only from Australia but the international poker scene as well.

This year’s winner of the Aussie Millions poker tournament’s main event is Vincent Wan, also known by his nickname, “Wonky”. He has won the main event by defeating his opponent, Ngoc Tai Hoang. The total time of the 414 hand tournament came to 15 hours, which is quite a long period of time! Factoring this in, the A$1,318,000 win was very well-deserved.

Vincent is a very frequent guest at Crown Melbourne, and this is definitely not his first win. In the past, he has claimed two six-figure Royal Flush Jackpots. And although he has had previous other wins, this victory is unique. Why? Thanks to his impressive first seven-figure scores. This is also the biggest cash reward in his entire career. The man must be happy!

The second place holder, Ngoc Tai Hoang was a bit late to the match. In the 15 minute period in which Hoang was late, Wang already took a lead in the table. Besides that, Hoang got the ignoble title of the “worst player”, which is not entirely unjustified… It was decided to make a three-handed deal between Hoang, Wang and the third player, Gareth Pepper.

Among these three players, Wang became the winner of the main event, while the Vietnamese Hoang went home with A$1,318,000, claiming the single largest score. Gareth was not disappointed with the prize neither, as he took home A$1,000,000. The whole three-hand game lasted for approximately five hours.

The final win for Wang came with closing three showdowns. Then, he doubled the first two, finishing the last one around 4 AM.

It is no surprise that winning more than a million should come as a very indulgent or delightful feeling. For Wang, his win in the main poker event looks more like destiny. At least, those were the words that he kept on repeating, after officially being declared the winner!

He got interviewed soon after the win. In the interview, he expressed his gratitude to everyone who has supported him and even thanked Crown Melbourne… For all those love and hate moments the place has given him! Most of the time, he was just speechless (or said that he was “speechless”), but you could definitely see a tingling or that exciting feeling of happiness in his eyes. He also added that he was delirious in certain moments.

Without a doubt, it was one of the best and the luckiest moments in the entire span of Wang’s career. He has also mentioned it during the interviews, outlining the importance of having great opponents. This tournament was no different, in that respect. He also mentioned that all those years spent on developing his skills have not gone to waste.