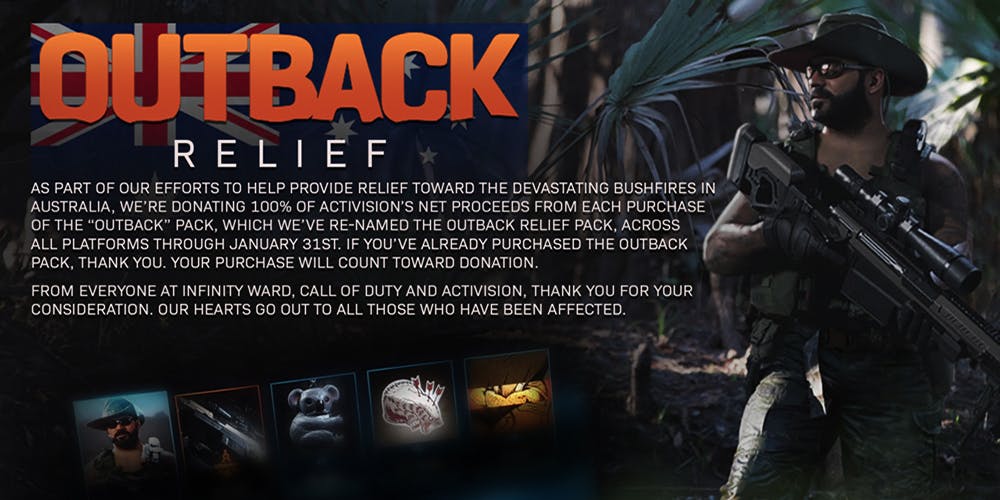 The bushfire in Australia, which started back in September, has really impacted the whole continent. The losses are huge and the whole country is alarmed by the scale of the environmental catastrophe. Millions of animals have been killed, and hundreds of people have been hurt, injured or left without livelihoods. A chunk of the whole continent is burnt and it will require several hundred years to repair or recover from the damage.

An American video game publisher Activision has announced the great news, on behalf of the Modern Warfare Community. The blog said that the community has raised $1.6 million for the Australian relief services. The decision to donate all purchases, made by the players to charity came as an agreement between the community and the company’s management. The donation was finalized last week, with the total sum revealed soon after.

Initially, there was no plan to donate any money to charity. The idea came straight after the outcry from the community itself. That was the turning point for Activision. They changed the route of the action, deciding to get involved and to embrace the appeal.

The generous support from the community has been a great source of motivation for everybody. Their backing was not shown only through words, but it came with concrete actions. The blog stated that the money paid for the purchase of the “Outback Relief Pack” has been fully donated to the Australian bushfire relief services. Activision also thanked the whole community, especially the ones who participated in setting up the initiative.

Thomas Tighe, the President of Direct Relief made a comment regarding the action, pointing to its ingenuity and kindness. He addressed and thanked the whole community for the great act of generosity. He also added that this amount of money will seriously contribute to the relief process, for which the whole of Direct Relief is very grateful.

In the end, gamers are not the introverted and silent people, sitting in front of the screens. These people are responsible for some very thoughtful actions, making really valuable moves with a single click.