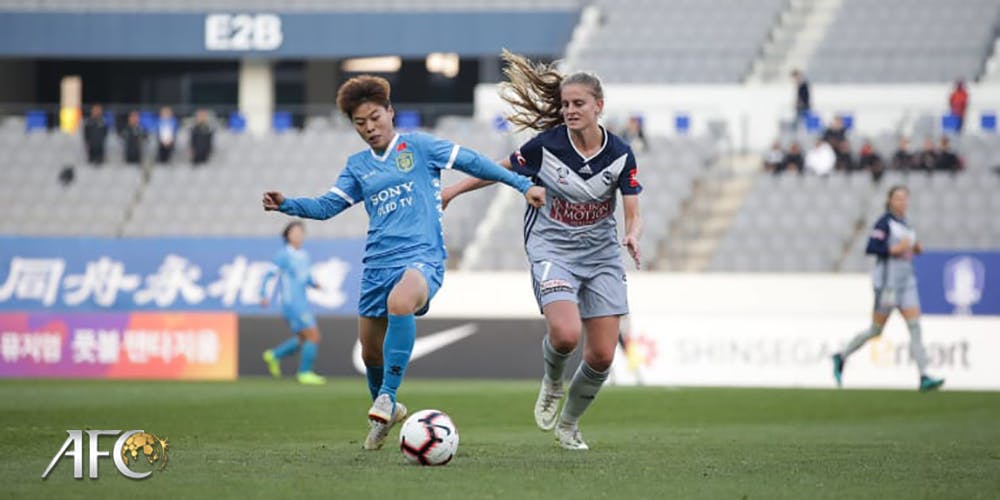 The first-ever edition of Asia’s Women’s club football competition kicked off on November 26th in South Korea. Four clubs are competing for their place in the competition but so far the Australian Melbourne Victory has been falling behind. The other competitors are China’s Jiangsu Suning, Japan’s Nippon TV Beleza and the host country, South Korea with Incheon Hyundai Steel Red Angels. All the matches take place at Yongin Citizen Sports Park in Yongin South Korea with teams playing in the single round-robin. Since all four teams have worked hard to earn their place in the competition and all of their records are very impressive, so far it’s been quite unpredictable with Melbourne losing their first game against Incheon.

Melbourne Victory entered the competition based on its maiden premiership last season. In 2018-2019 Westfield W-League premier the team was led by Natasha Dowie. The team finished four points clear before losing in Semi-Finals. Jeff Hopkins who has been with the team for some time now was even named the Westfield W-League Coach of the Year.

The next team in the championship in Jiangsu Suning, who is a 2019 Chinese Women’s Super League champion. The team has enjoyed quite a successful year. Particularly with Malawi international Tabitha Chawinga leading the goal-scoring front. Jiangsu finished eight-point clear in the Super League. In fact, the team is so successful that it managed to win 12 out of its 14 matches losing only one and drawing one. One of the weapons of this team is Ghana international Elizabeth Addo, who was just recently nominated for Africa’s Woman Player of the year.

Nippon TV Beleza secured its place at the competition by becoming the Nadeshiko League Division 1 champion in 2018. This is japans’s dominant football team who has gained the title of the champion a whopping 16 times, with the last four being in a row. It secured its 2019 championship just this month, by winning by three points again Urawa Reds.

Incheon Hyundai Steel Red Angels is a 2018 WK League champion and are the leading team in South Korea. The team had its start in 2009 and since then has never finished lower than second.

The championship began on the 26th of November and the last match will take place on the 30th of November. On 26th Nippon TV Beleza faced Jiangsu Suning, and Melbourne Victory faced Incheon Hyundai Steel Red Angels.

The match between Melbourne and Incheon was an exciting one. It took place on November 26th. In the first half of the game, Kim Dam-bi and Thais Guedes scored the goals, putting Incheon in the winning position. Melbourne Victory did try to take the control back during the second half but the Incheon’s Lee Se-Eun scored another goal, granting her team the win. The efforts made by the Aussies turned out to be pointless since the team didn’t manage to score a goal through the whole game. Although Victory did have a good start they failed to deliver throughout the game. Meanwhile, Incheon managed to score twice in a span of two minutes. Lee scored the last goal from a 25-yard free-kick and threw the ball at the bottom corner from the inside area making it a 4-0 win.

But during the 28th November match between the Victory and Jiangsu Suning, things started looking up for the Australian Team. They managed to score their very first point in the AFC Women’s Club Championship. The game against the Chinese champions Jiangsu Suning Ladies FC ended with 1-1 draw. This time Aussie players didn’t have much trouble scoring their first goal. Grace Maher threw a header before Jiangsu failed to score a winning goal, despite many open chances. This game was important for Victory and even though they didn’t score a huge win they definitely managed to bounce back from the failure of the game with Incheon. This was even more impressive considering that the captain Natasha Dowie was not present at the game due to sickness. Victory has to fight through without their leader but they managed to do it just fine.

Jiangsu hit back just a minute later, with Chinese international Tang Jiali scoring from 20 yards. And even though goalkeeper Melissa Maizels didn’t manage to take this one she did a great job at securing the net throughout the rest of the game. Jiangsu created a lot of opening for the goals and had multiple chances to score but Maizels managed to duck all of them. One she denied Tabitha Chawinga a goal and then she managed to catch the ball twice from Yang Li.

The next match between the two is scheduled to take place on November 28th. After that Melbourne is meeting with Nippon TV Beleza on November 30th.

So far the start has been less than promising but considering how Victory managed to pull through without their leader shows great resilience and potential for the team to show their full strength on their next game, hopefully with the captain present. The competition is definitely strong and Victory will have to give their all to gain advantage considering they lost the first match by 4 points.