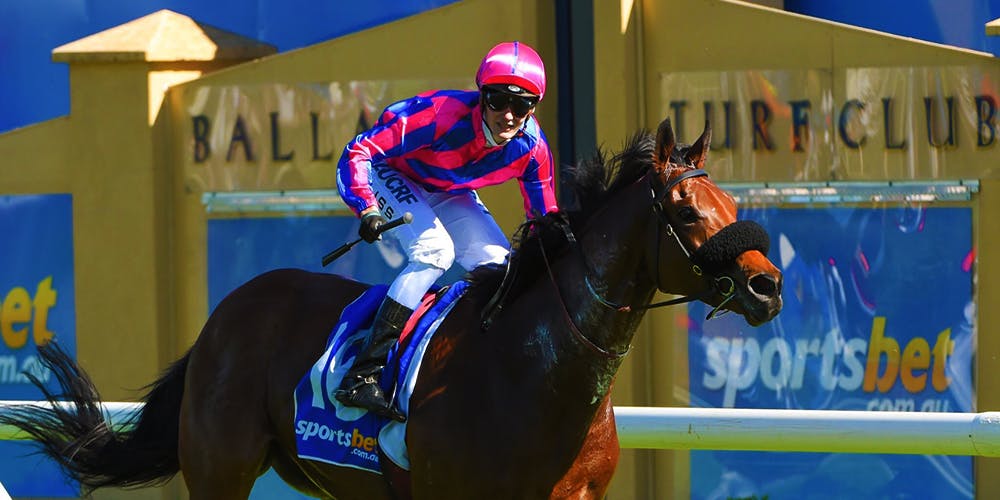 Regan Bayliss is a talented young jockey who began his career in 2013, moving from Queensland to take up an apprenticeship with Peter Moody at Caulfield.

After Moody left the training ranks, Bayliss then joined the Hayes & Dabernig stable where he continued to progress as one of the leading young riders in the country.

In 2017, Bayliss secured his first Group 1 success aboard Redkirk Warrior in the Newmarket Handicap in what was a breakout season for the young rider.

Regan and his older brother Jake wanted to follow their father into the saddle and did it literally.

“Any time he (Regan) rode, even way back then, he did in my 10 ounces (284 gram) saddle. The boys had ponies and Regan rode in my race saddle,” Bayliss said. They used to run their own races too. It was when Regan was eight and Jake was only 10. They made their own track on the property, made their own barriers, wore their own silks and raced each other madly.

It seems like Regan was lucky enough to be the person whose wishes come true very soon. As he has mentioned, it was his childhood dream to ride a Group 1 and be the winner maybe one day at Flemington. The young jockey had troubled to believe that this dream since his childhood has become a reality.

The Best Place To Be

But to do that Jamie Bayliss made the biggest call of his life to uproot his family and bring Jake and Regan and their sister Annaleise to Melbourne. Regan was just 13, Jake, 15 and heading to Mick Kent at Cranbourne through an association their father had from Singapore.

“I tried to put them in the best place possible and see what happens,” Bayliss said. “Melbourne was the place to be if they were going to make a go of it and I wanted to give them that opportunity.”

But to do that Jamie Bayliss, who gave away riding to train, had to give away that career for his boys. He would take up riding again in Victoria and had once ridden in a race against both boys. Jake won that race at Mornington, Regan ran third and Jamie finished last.

“It was a big call by my dad, we just packed up and left, I left my school friends and everyone behind, it was quite tough to start a new life completely, but as soon as I settled into Melbourne, I knew it was exactly the place to be,” Regan Bayliss said.

“Racing is my life – I am not into golf or footy, I hang around with my friends but I’m pretty bland, it’s all racing,” he said.

The Australian did most of his riding in Melbourne for former Hong Kong trainer David Hayes and after accepting the invitation to move, Bayliss said he had been picking the brains of the man who trained almost 450 winners in his 10 years at Sha Tin.

“I had a good chat with Mr. Hayes, he gave me a good grounding on what to expect. It’s good to have people who have had success in the past teaching me some stuff,” he said.

“There are a few jockeys in Australia that have had experience here. I have had a chat to quite a few of them – Damien Oliver, Brett Prebble – and they were really good, but when you come here it is a whole different experience.”

While he was only 21, Bayliss has experience well beyond his years, having ridden in Dubai, England, and America. Bayliss was enjoying one of his best seasons in the saddle with 44 winners in Australia. “It’s been a good ride since I started and it’s always been a goal of mine to get here. To get that opportunity so early, I am very grateful,” he said.

As the news has spread, Regan Bayliss will soon be returning to Melbourne after deciding not to continue his Hong Kong riding contract, and therefore leave Hong Kong.

Regan Bayliss will no longer extend the contract, meaning that he will return to the jockey ranks in Melbourne. The contract will end on the 31st of December and he will head to Melbourne straight after.

As Regan has mentioned in the last interview he decided to return to Melbourne, whenever the contract ends. He also thanked @HKJC_Racing, who gave him the great opportunity to try himself in China. He also said that the experience he got is very valuable and extremely helpful for him, especially at that age. Young rider also said that he will be returning to Melbourne after the short break.

So far Regan is not alone in this all. Umberto Rispoli, Italian jockey has also decided to join Regan on the leave from Hong Kong.