Why not?: Handmade dice a $2 million 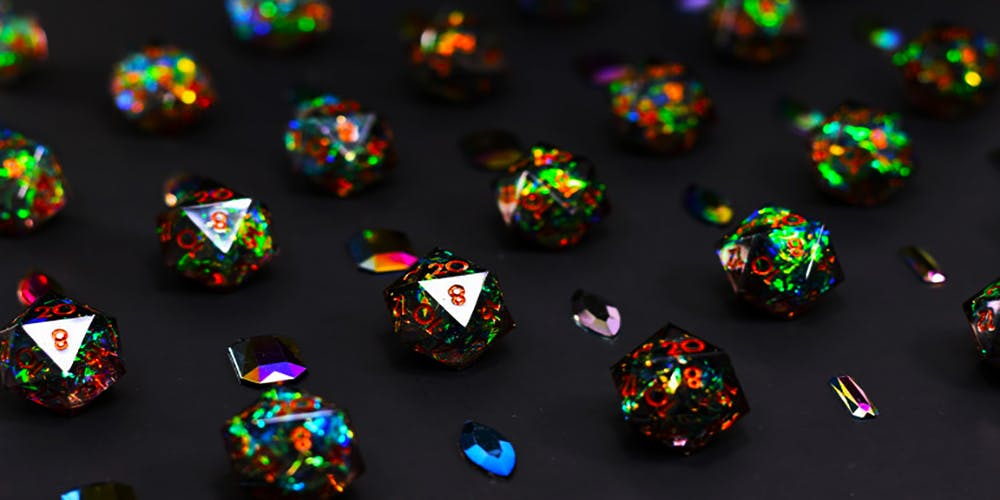 Karen Wang, who is the creator of the Dispel Dice was really hopeless about launching her new product to society. The product indeed is very unique and may be slightly odd as well. Karen launched her handcrafted, sharp-edged, custom gaming dice one day and the other day more than 12.000 backers have pledged over $1.5 million toward her gamelike creations. Well, it is not surprising that people love those shiny things and her worries were washed straight after.

How Did It Happen

Like all of us, Karen had some dark moments in her life going on at some point. Her friends helped out to overcome those moments. Well, should be mentioned that she has really good friends and motivators if they helped her to make million-dollar thingies. Minutes after the campaign went live the $US20,000 ($29,078) goal was reached. Six and a half hours later it hit $US1 ($1.5) million, unlocking every one of the 16 different colorways set up as stretch goals. Some 4,500 backers pledged at the $US48 ($70) tier on day one, securing a hand-crafted set of their choice. Even more impressive, 200 backers pledged at the $US840 ($1,221) level for 20 dice sets.

Kickstarter is the perfect place to find all of the kick-starters to have their portfolios over there with all of the fascinating stories. Wang also has her page where you can find all of the information regarding the creation of the million worth dices. According to the Kickstarter, she started Dispel Dice as a way to give back to the gaming fandom after playing tabletop role-playing games with her friends. She crafts the dice out of resin, using silicone molds of her own creation. The dice feature inclusions, which is a technical way of saying glittery bits suspended in the resin. The numbers are painted by hand.

Wang received positive answers on her work, and perhaps that was the motivation for her to share her creations with the world. Though this did not happen straight away, after a month of working on and sophisticating them. Wang has her own strategy and methodology for creating her shiny dice. She has been working on herself for improvement, she has been attending two facilities to make them even more sophisticated and attractive to the customers, as well as making them unique each time she launches a new set.

The Sets Have Been Set

Wang has launched several production sets. There were some of them called “Balck Emerald”, which came out to be pretty decent. There is something that makes the dices very mysterious in terms of the look, which most probably is the resin deep inside. The dices though look like they are handcrafted as they have the clear evidence of the numbers being painted by hand. The edges are sharp, to the point where putting one’s hand down hard on the pyramid-shaped four-sided die is an excellent way to get a die embedded in your palm.

The completely unique set of dice is produced every single time, which means that they are not scientifically balanced and every single dice can differ in balance.

You can definitely not use the dice while playing any kind of game especially with a lot of people participating, though what you can do for sure is that you can have them while playing with the responsible mature enough people, preferable in the sober state.

Dice with little imperfections can quickly become the stuff of friendly tabletop legend. They look glorious. They feel lovely. They are unique, and interest has been really high. Still, Wang was worried right up until she threw the go switch on her Kickstarter.

“I’ve been working on the crowdfunding campaign launch for 9 months,” Wang told in her interview, the night of the Kickstarter campaign’s launch. “I prepared everything I would need to on the off chance it was successful because my friends kept assuring me that it would be, but even up to this morning, right before the launch, I kept asking my friends and thinking to myself, ‘What if no one is interested in this? What if these dice aren’t good enough?’ I dropped everything else to work on Dispel Dice, but still had no idea what was going to happen today.” the creator of the dice commented after launching her product on Kickstarter and getting public acquainted with the impressive new player on the market of gifts.

When now one more talented person has been discovered by Kickstarter, we hope to see some of the further of her creations in the meantime. Well, while some responsible mature people are attracted to the new product, Wang will be thinking of some other unique ways to impress the public.