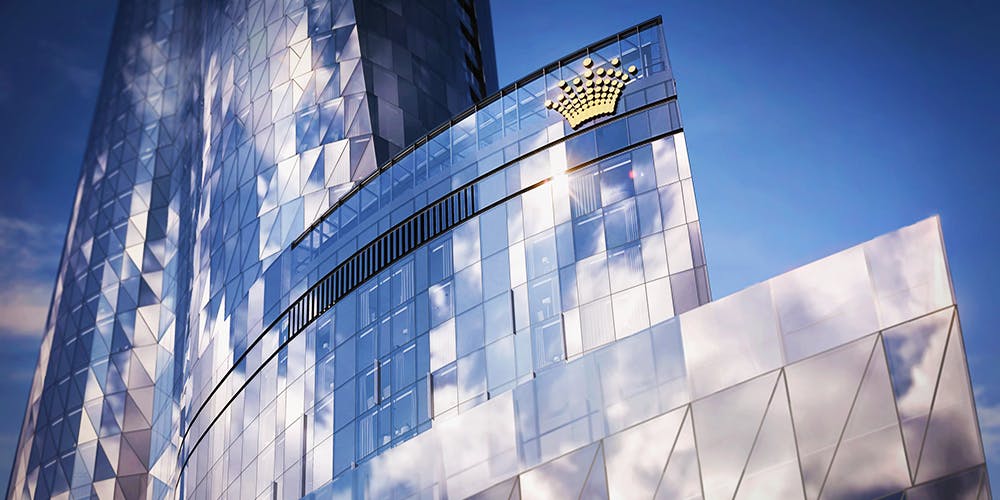 Crown Resorts is one of the biggest casinos in Australia. The company has luxury casinos, apartments, restaurants, and spas. Crown Melbourne is also one of the major casinos in the country. It hosts most of the nation’s gambling tournaments, such as the Aussie Millions, as well as many other championships, dedicated to table games.

Crown Sydney is another great project, which might even become a modern-day landmark for Sydney. The approximate budget of the project is $2.4 billion. The construction took off in 2014.

The project consists of a tall apartment tower block, which promises to offer some of the best views on Sydney landmarks. The 82-floor tower will have an unrivaled view over the Sydney Harbour, among other attractions. The whole complex will be brought together by the hotel, a signature restaurant, as well as a spa and relaxation area. But let us not forget about the premium gambling areas. If you are willing to move in, you can choose between 2- and 6-bedroom apartments. The highlight or the top of the offer is definitely the duplex penthouses.

No wonder that the expectations set on the Crown Sydney project are so high.

The project is definitely one of the most impressive developments in the area, if not entire Sydney. Everyone has been paying close attention to the construction process, pointing to great views and work done by the workers, designers, and architects. There is one small, embarrassing detail: the opening date.

The opening dates have been frequently, and regularly, changed. Initially, the whole complex was meant to be functional by the beginning of 2020, with some final touches, carried out until the end of the year. Then, the date was changed to the first quarter of 2021. Now, it has been announced that Crown Sydney might actually open three months before. The new date is set for Christmas 2020.

The main reason behind the back and forth is the height of the tower and the license, necessary to proceed with construction. Crown is definitely a company that aims for leadership, not only in the local market but globally. From the very start, they were set on getting an exclusive view of the city, as if making a statement. They have addressed the local government, Barangaroo Delivery Authority (BDA), paying for the license and the right for the construction. Sounds much easier said than done.

Soon Crown, and another bidder for the project, discovered that there is a breach of the agreement. BDA had simultaneously granted the right for another high-rise construction, to a different company. This meant that Crown Sydney would no longer enjoy exclusive views.

As BDA is formally accountable to the New South Wales (NSW) government, both bidders took the case to the court, demanding an answer for the breach of the agreement. The NSW Supreme Court opened the case in December 2018. The case was closed soon after. Why? BDA was found guilty of violating the development agreement with Crown, and its co-plaintiffs, Lendlease. The details of the court decision were never made public, although Crown still remains the only owner of the exclusive views of Sydney.

James Packer is the owner of Crown Sydney. He is also the biggest stakeholder in Crown Resorts and the head of the executive board. Crown Sydney remains his main focus for now: he is very eager to accomplish new projects.

Among other important details about Crown Syndey, the complex will have its VIP-focused casino. The company stays far from calling the casino specifically “a casino”. Instead, they refer to it as a “premium table games experience”.

The casino will be mostly dedicated to VIP clients of Crown. It will be a luxurious place, and if we are to trust the name or project description, there will be no pokies present. Rather, the place will accommodate table games only. Many details are still unknown to the public. That can only mean one thing: there is still a lot to come!