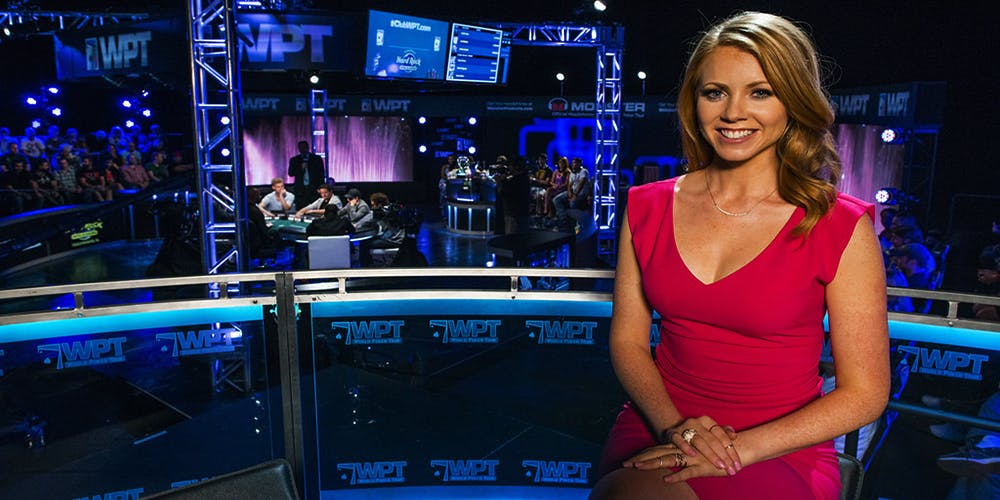 Gilmartin is originally from Ireland, though she has moved to Melbourne and started her poker career in Australia. She has hosted many productions, starting her career in poker only in 2013. Since then, she has been actively involved in many different poker activities.

Gilmartin has launched her poker career when she became the host of WSOP Asia, focusing on the production side for several years. Others got to know her later, particularly as the anchor of the World Poker Tour, which made her move to Los Angeles. At the tournament, she could have been seen with the most famous figures in poker, like Mike Sexton or Vincent Van Patten. While being the anchor, and hosting the World Poker Tournament, Gilmartin became an anchor-producer for the World Poker Tour Alpha8. That last tournament is a high roller series of poker tours.

Since she is very actively involved in the industry, she has instantly turned into one of the most recognizable faces in the poker showbiz. If you ever wondered where or when you saw Gilmartin, you should rewind your mind to that last poker tournament. Yes, she is present at almost every event. And almost always, she is the person who cares the most about bringing you the latest news or updates. About any kind of poker tournament out there. That is Lynn Gilmartin.

And that is not everything. Recently, Gilmartin launched a fundraising campaign for the Australian wildlife services, helping those affected by the bushfire crisis. She organized the campaign herself and collected over $99,000 in total. The collections will be donated to wildlife services, who have since pledged to protect and treat injured animals. The final goal for the Poker Players for the Australian Wildlife campaign is to raise $100,000 through individual donations.

Lucky Gilmartin has received a very well-deserved Australian Poker Hall of Fame honor. The award was presented by Joe Hachem, the President of the Australian Poker Hall of Fame, who is also one of the most successful and well-known poker players in Australia. Having accepted the honor, Lynn will be joining some truly legendary poker players, such as Jeff Lisandro and Joe Cabret.

Gilmartin has commented on her award, saying that poker is a very unique game. She commended on the courage and spirit of the poker players, who are actively present in the industry. She added that it is a great honor to stand next to these people, expressing her gratitude for the distinction she received.

The ceremony was not only a triumph for Lynn, but for another Australian poker player as well: Kahle Burns. He has received the Hall of Fame honor at the age of 30, which is already a great achievement. Kahle has been playing professionally for only 12 years, but this did not stop him from becoming one of the most recognizable players of 2019. He has won two World Series of Poker bracelets, which is an exceptionally hard thing to do, even for very experienced players.

$8 million is the total amount won by Kahle Burns, making him the second person on the All-Time Money List. He can surely stand up straight, placed just behind Joe Hachem. Considering all his efforts and technical abilities, he is still capable of doing great things in his career.