Aussie celebrities who love to gamble 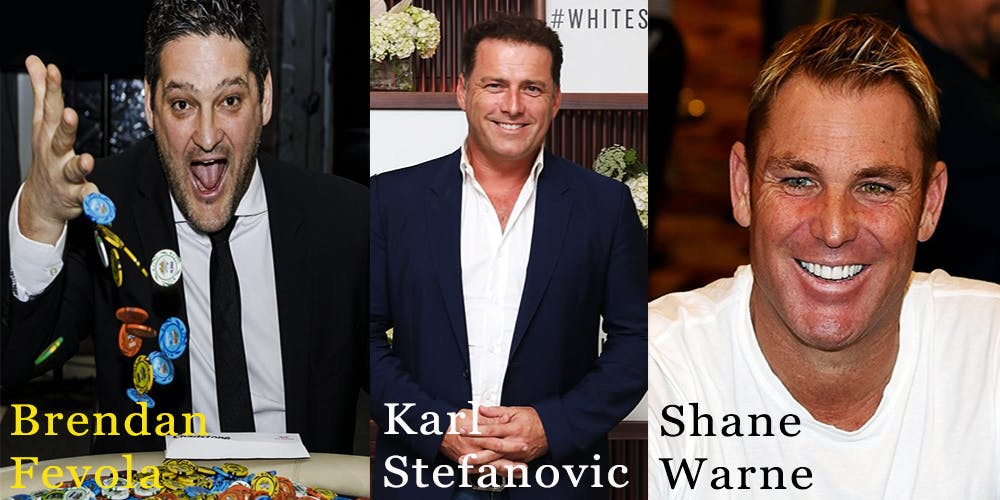 Every time you read an article about gambling, there’s a chance that you will find the information about how much Australians love gambling. Actually nowadays almost 70% of adult Australian engage in some form of gambling as a source of entertainment.

Australians engage in a variety of different gambling games starting from real casinos to online venues. And they have a love affair with pokies. So why shouldn’t celebrities engage in this entertainment as well? Here we have listened to some of the most prominent players in Australia’s pop culture.

A former host of Today show always had a big personality. That’s why he always does what he deems right and doesn’t let others take control too often. Being the Aussi celebrity and the important part of the Today show his income has been quite impressive for the last years, that was before he got dropped from the show. Receiving the news about this while on a honeymoon with his new wife must have been tough to process. But clearly moving on quickly, Stefanovic still works in the media and is currently located at the radio show.

But we’re here to talk about his love of gambling and pokies specifically. Along with that Karl is a friend with the owner of the Crown brand, the world-famous casino and hotels. So it’s no wonder that he enjoys playing at the machines every once in a while. Apparently, Karl’s love for casinos and gambling is so deep that the Australian presenter celebrated his 40th birthday at the Crown, back in 2014.

The next Aussie personality that is famous for his love of gambling is a member of the Australian Football Team. Fevola used to be played for Carlton and Brisbane before quitting football for good. In his prime days, he was famous for being quite a ladies man and his love of gambling of course. He would be often caught partying and an ex-AFL star was a frequent visitor of the Crown and the Tasmanian casino. Back in his prime, Brendan would earn a lot playing football and would usually use that money to gamble at different casinos. Now he visits casinos less frequently because he’s a father of two and tried to dedicate more time to his family. He now works for Fox FM alongside Fifi Box on the Fifi, Fev, and Bryon breakfast radio show. He still talks fondly about the days where he used to get on the front pages of Australian Tabloids and used to have wild nights out almost every week.

And the last person we will discuss on our list who is also an avid gambler is Shane Warne, a famous Australian cricket star. He is also known in Australia as Warnie and is often hailed to be one of the best bowlers in cricketing history and once won the title of the best cricketer in the world. Being this successful does allow you to indulge in a variety of entertaining activities and gambling is Warne’s choice. His public life has been widely discussed among Australians because the public finds him very interesting nonetheless because of his love of gambling.

Warne is definitely what one would call a life of the party and has been caught by paparazzi partying in various places. But besides partying, he has an affinity for the gaming tables. He was even an ambassador for Club 23 at Crown Casino. As an ambassador, Shane Warne hosted a charity poker event on the gaming floor and even now, he hosts private games that are usually packed with other Aussie or even international celebrities. Shain now focuses primarily on his job as a commentator and has actually gained a lot of respect for doing what he does. He also takes time to hang out with family and his children quite a lot, that’s why he’s not seen as often in usual party places.